We’re still translating the text for version 4.0. This means that much of the information will be presented to you in English only, even though you may have a different language selected. Rest assured that we will have all of the new text translated ASAP. We thank you for your patience and understanding in the meantime.

Jumping up a version number isn’t something we take lightly at META Games. Each version was game changing, and 4.0 carries that torch when it comes to knowing what decisions you need to make for your team to be successful. It was clear since the release of version 3.0 that people had difficulties understanding the strengths of their or the opponent teams and how to build around it.

Key information was disconnected from each other by layers of abstraction and the details were scattered across different screens and tool tips. Once the details were found, they were buried in walls of text and had to be made sense of with excel tables. The Community Champonions made brilliant work of the system, but new players would stop playing within 7 days out of frustration. We needed to find a way to make RIVALS easier to learn, give coaches more information about their team and how they compare to the competition. After putting our heads together, we identified 2 components that were key to achieving our goal:

It’s funny how two simple looking sentences can result in a jump from version 3.3 to 4.0 – read on and you’ll understand exactly what that implies!

(if you are not a fan of reading long patch notes, go to the bottom of the page and watch Xave Valor's videos!)

Esports is all about precision and speed. Coaches need to be able to have readily available and intuitively displayed data so that they can make important decisions under pressure. The new setup hub was designed to meet coaches’ needs, whether they are looking on ways to improve their own team or scout an opponent to find their weakness.

The setup screen isn't the only thing that's new, it's also packed with brand new tools:

Since the theme of this release was streamlining, a logical part of the game to iron out was the unnecessary complexity of the attributes and tactics. Unless you had spent a lot of time playing RIVALS, it just wasn't very clear which player attributes aligned with which plays and via that with which champion. Every time you wanted to train your player, you had to do a lot of mental gymnastics or even use spreadsheets in order to understand which attributes would be beneficial, and their naming scheme didn't always help with that.

That's why we condensed 8 player attributes down into 5 "skill aspects". We also adjusted the names of the tactics to make it more in line with the new naming convention, as seen in the chart below.

Everything in the game aligns with this now, which totally streamlines the process of understanding the strengths and weaknesses of not only your team, but the rival team as well:

This makes it much easier to match patterns and create make nice team combination. This becomes even more interesting when you consider picks and bans. We currently have 4-6 champions per Aspect, and a lot of those can be banned out in a match. So think of a good strategy and train your players to be flexible enough to overcome your opponent’s ban strategy, and focus your power on their weaknesses to deliver the killing blow.

We’re upgrading your team too:

If you were worried that we would be leaving your old team in the dust by the changes, you can breath a sigh of relief now! We’ve got you covered:

Now go forth and conquer, there is loot to be won!

Who doesn’t like to show off their accomplishments? We know almost all of you do, because it was one of the most common requests you had for us. That’s why we designed a long list of accomplishments, a whole heap of items for you to earn, and a brand new place to show them all off in!

Check out the new showcase: 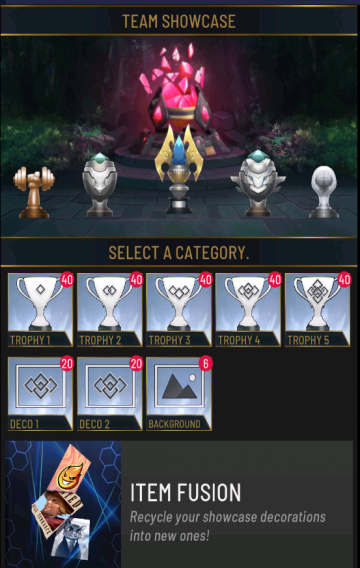 Good on you for staying with us so far, because you’re about to be rewarded with some very detailed information on key game mechanics changes. Remember how we said the main focus of 4.0 was streamlining the game so it’s easier to understand? Thanks to your feedback on Discord and in the reviews, we realized the confusion required more than a UI fix. Here are some of the common difficulties people faced:

Combo plays and basic plays were sources of frustration for everyone involved, it was obvious that something had to change. After careful consideration, we ended up replacing them with an entirely new system.

Just as before, each champion has their own set of plays. However, each champion will now attempt to carry out a play in each phase. Players on a team will need training int the champion in order to unlock the full potential of a given champion.

It all comes down to Initiative – play initiative:

The play bar represents a constant fight of play initiative and you are guaranteed to have at least 3 plays in a phase. The two plays with the highest initiative will not be added to the play list unless conditions change and a slot opens up for them to be played (e.g. if another champion dies and their plays drop to a higher initiative). Initiative works similarly to how 3.0 worked, but now we make it very transparent by displaying the values directly on the play bar (before it was more of a black box in the background).

The refined system behind Champion Plays allowed to to cut out combo plays and basic plays completely, streamlining the coaching experience while still allowing for the same level of decision making and strategy that was introduced in version 3.0

We were able to work in a few more of your common requests and more this release!

There are a few bugs in this version which will be fixed very soon. If you find a bug that is not on this list, please report it to us on Discord so that we can work it on it as soon as possible.

If a picture speaks a thousand words, video is king:

Xave Valor, one of our top players who maticulously beta tested this verson, made two videos which take a deeper dive into the new features. He's one of the leading authorities on RIVALS knowlesge, so don't you dare miss out on them!

Our community has been key to helping us realize what changes were needed, but some members went the extra mile to help us test this new version so that you can have the best game possible. Thank you to the following people for all your hard work and communication!

If you made it this far, thank you for reading! We look forward to hearing your response and are excited to bring this new version to the world. Last but not least, have fun – that’s why RIVALS was created to begin with.

We have many more exciting features planned, so stay tuned to our Discord server to get the inside scoop!